What You May Not Have Known About, “The Martian”.

, by Andy Weir, you already know it’s a very entertaining story. But what you may not have known is that it started off as an Indie book that was self-published by the author. 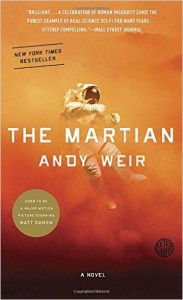 Andy, like a lot of us, wanted to be an author more than anything, so he saved up his money, quit his job, and wrote full time. He gave himself two years to get something moving, and after two years of going the traditional route of sending out query letters and trying to land a book deal with a publisher, he was forced to give up and go back to work.

But Andy didn’t give up and kept writing. He was passionate about space, specifically how to get someone to the planet Mars, and how to survive once you got there. He had a successful blog, so he decided to write a story one chapter at a time and post it on his site. His readers loved it, and asked him to convert the chapters to an eBook to make it easier to read. So he did, and posted it on his site for free. But it was still hard for the average person to figure out how to put the eBook onto an eReader, so they asked him to load it onto Amazon to simplify the experience. He wanted to make it free, but Amazon only allows you to set the price as low as $.99 (This was before KDP Select which allows you to do that now, if you’re willing to go exclusive with Amazon). Before he knew it, The Martian was a runaway success. So much so, that he was offered a publishing deal with Random House for hard cover rights, and a movie deal with Ridley Scott in the same week.

If you have not read or seen The Martian yet, I highly recommend it. It’s one of my favorite books. But more than that, it’s a testament to perseverance, and a prime example to the incredible shift occurring in the publishing industry.

That would be something huh? An Indie author’s book as a Best Seller and a Best Picture. I think it could happen.

What do you think?

Anthony A. Kerr has always been a storyteller. Whether it was acting out elaborate plots with Star Wars figures when he was little, writing really, really, bad movies in high school, or creating weekly comic strips at work. Stories are always swirling around in his head, yelling at him to put them down on paper. Anthony grew up in Wooster, OH and currently lives in Denver, CO with his wife and three children.
View all posts by Anthony A. Kerr →
This entry was posted in Author Blog, Indie Publishing, Self Publishing and tagged Andy Weir, Changes to Publishing, The Martian. Bookmark the permalink.