After spending a couple of hours last night working on the map, I realized there were a couple of issues going on.

First, the image was too faint for the high DPI, which I fixed by bringing up the contrast and adding some shadows to create depth.

And second, my printer sucks. I should have figured this one out earlier, live and learn I guess, but when I exported the image as a PDF it looked great. So with the internal formatting almost done, my intention is to print it at an office services center and do one last major proofread before uploading it to a print on demand service. I’ll hopefully catch any formatting issues at this stage before it goes to print.

For reference, I used Autodesk Sketchbook Pro and Adobe Photoshop to first draw the image, then to add text, contrast and shading. I probably could have done all of this in Sketchbook, but I’m more familiar with Photoshop. Below are the before and after images of the map. 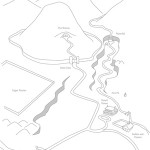 The original was drawn in Adobe Illustrator as a placeholder image 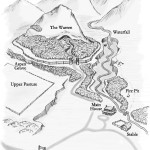 Anthony A. Kerr has always been a storyteller. Whether it was acting out elaborate plots with Star Wars figures when he was little, writing really, really, bad movies in high school, or creating weekly comic strips at work. Stories are always swirling around in his head, yelling at him to put them down on paper. Anthony grew up in Wooster, OH and currently lives in Denver, CO with his wife and three children.
View all posts by Anthony A. Kerr →
This entry was posted in Author Blog, Indie Publishing, Self Publishing. Bookmark the permalink.